Party in the Pool -- The Zumba Apocalypse (or, Adventures with Trixie)

No, it wasn't really apocalyptic, but now that I have your attention....

I have been curious about Zumba for years.  Zumba was created by Alberto Perez in the 1990s, and combines aerobics, martial arts, and a hodgepodge of dance styles (latin, hip-hop, belly dancing, afro-carribean, etc.).  It bills itself as high energy, aerobic and calorie burning -- all good.  It is also a huge and profitable franchise (teachers have to be certified by the Zumba Academy).

In my quest for all things water, my search uncovered Aqua Zumba, an "invigorating low-impact pool party."  It's summer, I'm in the mood to try something new, so why not?

Unfortunately, my gym doesn't offer Aqua Zumba, but I found an evening class at New York Health & Racquet Club.  Luckily, my friend Trixie Bobotnick (pseudonym of her own creation) is a member, and gladly agreed to invite me to the class.  In addition to being a great friend and a great sport, Trixie is an accomplished triathlete, so I wanted to get her perspective on the workout (since I still consider myself a recovering couch potato).

We arrived at the appointed time and were greeted by our instructor Taryn, who was very upbeat and welcoming and sported a t-shirt emblazoned with the Zumba logo.  She gave us water gloves and directed us to put on flotation belts (the club had an abundant and well organized stash of flotation belts, buoyancy bells, noodles and other pool accoutrements).  We jumped into the pool.

The music started (Gloria Estefan) and we were off.  First we sprinted back and forth across the pool, propelling ourselves off the sides of the pool with our legs at the beginning of each lap.  We did another variation of this routine.

I should mention that I have been on an antibiotic this week and hallucinations are a possible side effect.  At this point in the class, Taryn shouted "run, walk or calypso across the pool."  I thought I was hearing things, but then the lady next to me -- who had been struggling with the running routine -- broke into an impeccable samba and sashayed across the pool.  I don't know if it was the class or the antibiotics, but everyone was having fun.  The music changed to Ricky Martin and we did another variation of running across the pool and jumping up and down at the end of each lap.  At this point, several people were dancing, and I think I even started singing along to Living La Vida Loca.

We did one more warmup, bicycling across the pool on flotation noodles, and then we moved on to the dance component of the class.

I consider myself fairly coordinated and I can generally follow a dance routine, but dancing in water is trickier than expected.  The resistance of the water throws your timing off -- it takes a little time to get used to the movements and coordinate with the music.  We started with sort of a hybrid latin/belly dance routine.  I felt a little ridiculous but was inspired by the energetic lady in the front row who was sporting an animal print swim cap.  She was totally swept up in the moment.

We moved from that into some sort of African dance number.  I tried to get into the spirit and imagined myself performing in the Lion King.  Unfortunately (maybe due to the antibiotics) the Lion King quickly devolved into the very irreverent (and hilarious) Book of Mormon.  I got a really bad case of the giggles as the song Hasa Diga Eebowai got stuck in my head (Google it).  I regained my composure and we did a couple of other dance routines (incorporating belly dance, martial arts and hip hop elements), and we finished the 45 minute class with a combat crawl back and forth across the pool.

Overall, the class was fun, energetic and not overly taxing.  I feel like I got a gentle full body workout, and my knee actually felt great the next day.  I would do it again (but I still prefer Aqua Boot Camp and Deep Water Running).  Trixie found it less challenging, but thought she might do it again (as a cool down after her training sessions for the marathon).  Trixie still prefers her hill workouts to the party in the pool.  Go Trixie!  I owe her a cocktail as a thank you for treating me to the class. 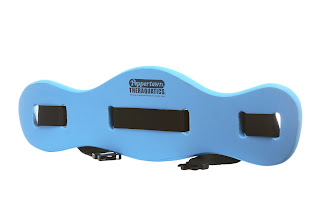 The belts are similar to the one recommended by the knee doc.  For those of us with curves (and even Trixie, who is in better shape than the Mermaid), the belts are like Victorian corsets -- incredibly uncomfortable -- let's just say the belt zigged where I zag.  I have had better luck with the belts provided in my Deep Water Running class : 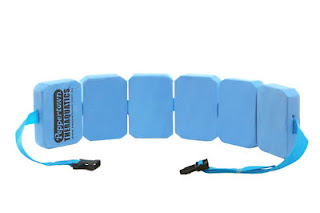 They are more adjustable (you can distribute the flotation devices around on the belt) and they keep me afloat in 9 feet of water.  I'm not an expert -- I don't know if there is any real difference between the two types of belts.  Use what works best for you.

The Zumba website has a class finder that allows you to search for Zumba classes worldwide.  Once you have located a class, I would call the facility to make sure they still offer the class (one of the listed clubs in NYC no longer offers the class).  In Manhattan, there are classes at New York Health & Racquet Club, the JCC, the Harlem Y, Z Club, Manhattan Plaza Health Club and several other venues.

Next week, I am off to investigate the water exercise scene (and visit friends) in Vancouver -- will report back post vacation (in my hopefully relaxed post-holiday Zen-like state).