Searching for Zen: The Mermaid Tries Aqua Yoga at Asphalt Green in Honor of Thanksgivvukah!

I've occasionally felt that I could walk on water, but this was a pretty neat trick.  Before I explain, I should backtrack a little.

I haven't blogged in a few weeks.  I have been sticking to my exercise routine, but I've been stressed and a bit down -- primarily because of work.  Without going into details, my company has been in the news a lot in recent weeks, and it's wearing on me.  I haven't been able to escape the constant media coverage and I've been a bit demoralized -- I haven't been sleeping well and my jaw has been permanently tense.  Things are finally calming down and I am feeling more like myself, and I have to say that spending time with my friends and sticking to the exercise routine has been a godsend -- it has helped tremendously.

I also strained my back this weekend maneuvering a large turkey into the oven for my annual Thanksgiving prequel pot luck party (ironically enough, not my first turkey-related injury -- maybe it's time to consider vegetarianism), so I thought a little gentle exercise might be just the tonic.

Since the pool at Equinox is closed for the holiday week, I decided to try something a little different.  And so I ended up at Asphalt Green on this frigid Monday night.

When I first hurt my knee, the knee doc recommended that I try Asphalt Green.  I hemmed and hawed but of course he was right.  I grew up on the Upper East Side (and -- in fact -- learned how to drive on York Avenue and East End Avenue near Asphalt Green's current location).   Now that I live on the West Side, Asphalt Green is quite a bit out of my way.  Getting there from work took a solid 45 minutes (as opposed to 15 minutes to get to Equinox or deep water running).  Getting home was not too bad, though -- I got home about 10 minutes later than I normally do on Monday nights.  It is still a bit inconvenient to get there three times/week, but it was totally worth the trip.  Hopefully the facility won't be destroyed by the "Marine Transfer Station" (i.e., garbage dump) that they are planning to build there (for more information, click here).

The aquatics center at Asphalt Green is unlike any other pool I've tried in the city.  There is an enormous olympic size pool, which is divided into three sections.  One section was full of high school swimmers free-styling back and forth (team practice).  There were recreational swimmers at the other end, and a couple of lanes of younger kids swimming across the middle.  They opened Asphalt Green after I was out of college -- I wish it had been open when I was in high school (nearby).  It is head and shoulders above the 92nd Street Y. 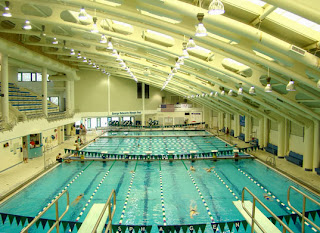 I loved the energy of the place.

The yoga class is held in the smaller training pool, which is tucked in an alcove next to the big pool (with nice big windows next to the pool).  It was so cold that the windows had fogged up, but I imagine it would be sunny and bright in better weather. 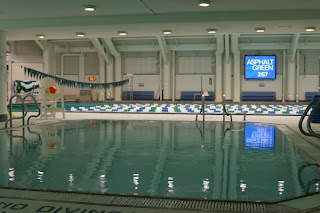 The depth on the training pool is adjustable.  When I arrived, the bottom of the pool was flush with the pool deck.  We walked out to the center and they lowered the bottom to a depth of about 4 feet, gradually easing us into the water (they adjusted it a couple of times during the class for different exercises).  The training pool was also nice and warm (which was great on such a cold night).  It was kind of like exercising in a giant bathtub -- very soothing (and much roomier than the training pool at the JCC on the Upper West Side).  The pool is totally accessible, and the lifeguards showed me the special chairs they use to help people who cannot walk get into the pool.

The regular teacher was away this week -- we had a substitute named Joni who was excellent.  I haven't done yoga in a long time, but it was very similar to a class on dry land, with a few variations.  We started off with some bandhas (breathing exercises) and then did a few different poses and routines, mostly named after animals -- cat pose (done standing up rather than on all fours), the flamingo, cow pose, the crocodile (standing pushups against the side of the pool), and tree pose.  We did a sequence of warrior poses (lunging and stretching the arms).  We finished with some stretches, including the aqua yoga version of downward facing dog (which we did standing up against the side of the pool).  We didn't do any handstands.  At the end of the class, they raised the bottom of the pool and I emerged like Venus stepping out of Botticelli painting (but sporting a Lands End Tugless Tank). 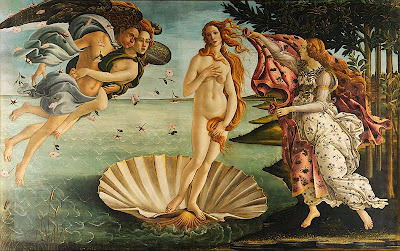 It's a little hard for me to describe the class, but I really liked it for several reasons:

Asphalt Green offers Aqua Yoga on Mondays at 6:30 pm, and they are adding an early morning class in the spring.  The classes are open to members and you can also buy a series of classes.  I liked the class enough that I may invest in a class card for an occasional class (maybe every other week).  They also offer Aqua Tai Chi and an extensive arthritis exercise program.  The gentle exercise is a good complement to the more aerobic workouts.

Asphalt Green is at 90th and York Avenue (reachable on the 86th Street crosstown bus and the M31 bus).

Namaste and Happy Thanksgiving from the Mermaid. 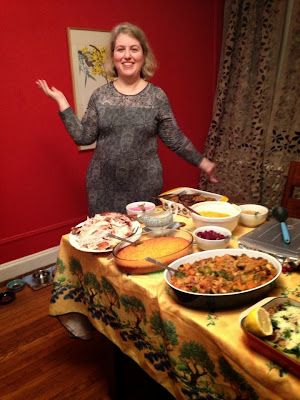