Mermaid at the Movies -- Channeling my Inner Esther Williams

It's Christmas week -- Merry Christmas to those who celebrate!  Good New York Jew that I am, I spent yesterday indulging an old holiday tradition -- a movie and Chinese food with my folks.  I have been lucky enough to spend recent Christmases with friends, enjoying delicious feasts (in NYC, the UK and even California).  This year, I wanted to have a low key holiday and I really wanted to go to the movies.  Luckily, my parents were game.  We went to see American Hustle (very good, but didn't live up to the hype, in my opinion -- but I loved all the seventies hair styles and period details) and had nice big bowls of noodle soup and some dumplings at a very frenetic Chinese restaurant on the East Side.  Chatting up the staff in Mandarin helped us get a better table, at least.  It was a good day, but the reality of a teeming Manhattan movie theater did not live up to my childhood nostalgia.  I think I'll go back to Christmas dinner with friends next year (and watch some videos on Boxing Day).

I am working this week, but I still have a chance to catch up on some movies at home, so I started thinking about water-themed movies (while trying to avoid obvious choices like Splash and The Little Mermaid).  There are not that many movies depicting water exercise.  A friend mentioned Lost in Translation (one of my favorite movies).  I forgot about this scene of Bill Murray swimming in the Park Hyatt Tokyo.  The underwater view of the class is pretty great.  Bill Murray gets in on the action in this deleted scene.


I also thought about this scene from Cocoon, in which Hume Cronyn, Wilford Brimley and Don Ameche are rejuvenated with the help of alien pods in the swimming pool.

Those guys are pretty great divers (or else the editing of the stunt men is very good).

But then I decided to go back to the source and discovered this great set of Esther Williams DVDs on Amazon (you can also stream some of these online via Netflix, Amazon Video, etc.).  Nothing beats a classic.  Esther Williams passed away earlier this year at the age of 91.  She was a championship swimmer and became the queen of the Hollywood water musical extravaganza (there are a bunch of great clips from her films here). 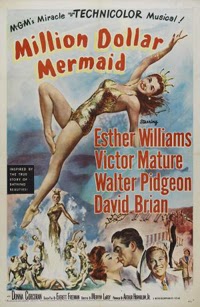 Yes, some of these films are very dated.  Looking back, however, I love that all the women are very athletic without looking starved (they look healthy and athletic but still a little curvy).  The bathing suits are very retro-glam, and it makes me want to put on a flowery swim cap and sign up for synchronized swimming lessons.  Williams married Fernando Lamas (her co-star in several films, including Dangerous When Wet).  Dangerous When Wet also features a sequence with two animated co-stars (Tom and Jerry).


This sequence from Easy to Love puts the Go Go's to shame.

I leave you with this Oscar-winning song from Neptune's Daughter (partially filmed at Weeki Wachee in Florida), featuring Esther, a surprisingly hot young Ricardo Montalban, Betty Garrett and Red Skelton.  Skelton is pretending to be a South American polo player, hence the strange accent (don't ask).


A holiday classic (it probably wasn't that cold in Southern California, but suspend your disbelief and enjoy!).