We got a brief burst of spring-like weather this weekend (before the return of the dreaded polar vortex). It continues to be a bit of a struggle to get to the pool, but I tried a great class at Asphalt Green a few weeks ago -- Aqua Tai Chi -- taught by Andy Diaz (or Sensei Andy).

Tai chi is actually a defensive martial art, but it is practiced by many to promote balance (mental and physical), flexibility, and improved circulation.  I lived in China years ago, and I've always been fascinated by tai chi.   I taught at a college in Beijing for a year after I graduated from university.  Every morning at about 6 a.m., a group of my Chinese colleagues from the college would go out to practice tai chi in the little garden beneath my apartment.  Sometimes they would walk to class carrying swords -- to practice a variant of tai chi called taijijian.  It was a bit incongruous to see the foreign language faculty armed to the hilt at the crack of dawn.  I always wanted to join them but, alas, I've never been a morning person.  But I did manage to sit on my little balcony, clutching a large cup of coffee and watching the group practice their moves, before heading off to teach my English classes.  I found an old photo of one person practicing in the garden (taken from my balcony, coffee cup out of the frame). 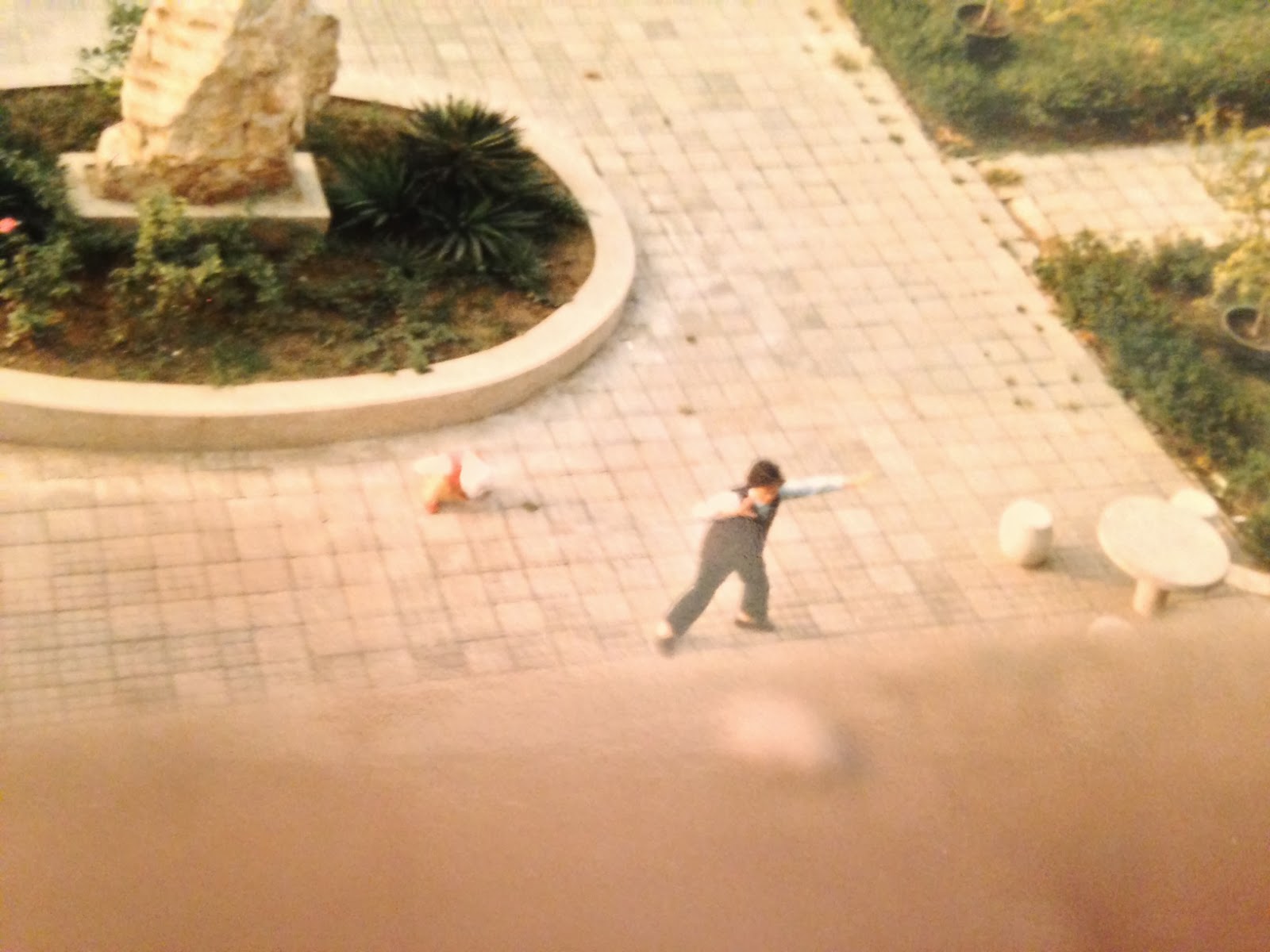 I also found a random photo of me and my French neighbor Thierry (from my China days) next to a giant mountain of cabbage (which was basically the only vegetable available there during the freezing winters). 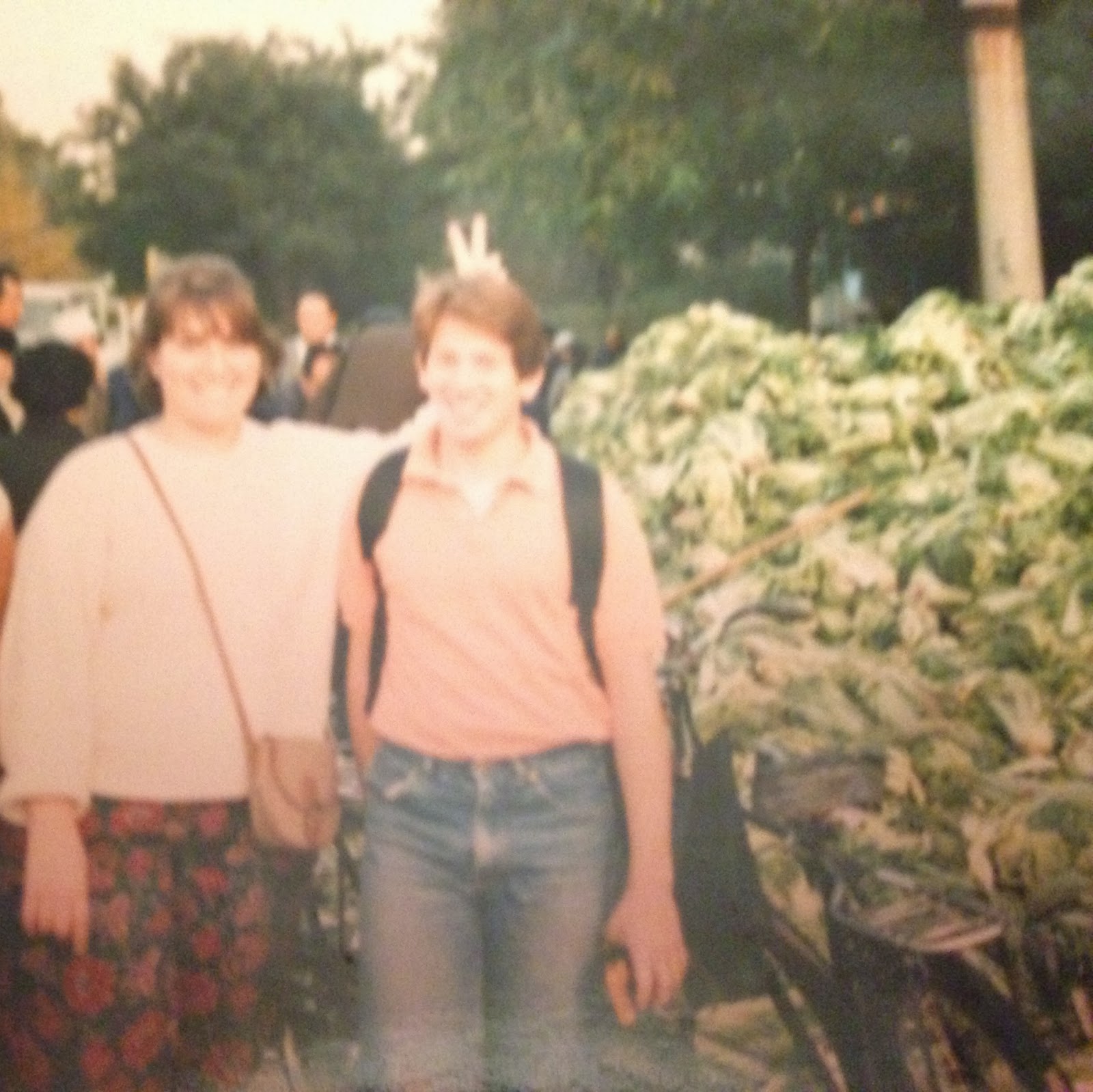 In the winter, people would stockpile cabbage on their balconies to last through the cold months.  I bought one and put it out on my balcony in a sign of solidarity.  Oh the things you find when you pull out the old photo albums....

Since I am still not a morning person, I was happy to find an Aqua Tai Chi class on Wednesday evenings at 6:30 in the lovely heated training pool at Asphalt Green (on the Upper East Side).  The teacher, Andy, has been practicing tai chi for nearly 40 years.  He was extremely friendly and interesting.  There was one other student in the class that night.  Luckily, she has been studying tai chi for years, so she was able to help me out. We started with a series of six poses, some of which had amazing names, including Parting the Wild Horse's Mane, White Crane Spreads its Wings, and Grasp the Bird's Tail.  Andy was extremely attentive to posture and position, and we repeated this sequence many times.  There was a nice flow between the slow graceful movements, and I really liked that I had to engage my mind (to memorize the sequence) in addition to moving my body.  Everything involved balancing two forces -- pushing and pulling, moving backwards and forwards -- yin and yang.  At the end of the class we went through a sequence of about 70 movements -- by that point I had no idea what I was doing, but it was fun.  I will probably try the class again -- I felt really relaxed and focused afterwards, and I liked the whole mind-body aspect.  I need to read up on tai chi so I can understand it better.

Asphalt Green is located at 90th and York Avenue.