And One Time, At Mermaid Camp...

So, I have really been neglecting the blog.  The day job has been requiring a lot of time and mental energy this year.  Working on some fun stuff but putting in a lot of hours.  I REALLY need to clean my house today (edging toward a cameo on "Hoarders" at this point), in preparation for my Thanksgiving Prequel party next weekend.  Perfect opportunity to procrastinate and do a little blogging.

In early October, I finally made it to mermaid mecca -- Sirens of the Deep Camp at Weeki Wachee Springs in Florida.  I almost didn't get there -- Hurricane Joaquin was threatening the east coast and there was a nor'easter the day I was scheduled to fly down to Tampa.  Everything worked out and I had a really fun weekend.

Weeki Wachee Springs is a state park in Florida, about an hour north of Tampa.  "Weeki Wachee" means "little spring" or "winding river" in Seminole.  We swam in a spring that goes into the Weeki Wachee river, which eventually flows out to the Gulf of Mexico.  The water was a chilly 74 degrees, and we shared the spring with some fish and turtles, as well as the professional performers who swim in shows several times daily.  In cooler weather, there are manatees (sadly, we didn't see any during our camp weekend).

The park was started in 1947 by Newton Perry, a former Navy diver, who developed a method of breathing underwater using an air hose. Perry built the original underwater theater and the park was a popular tourist destination in the 1950s.  The park was purchased by American Broadcasting Company, in 1959.  ABC build a 500-seat theater, embedded in the side of the spring, 16 feet below the surface (ABC no longer owns the park).  During its heyday, the Weeki Wachee mermaids were local celebrities -- our teachers told us amazing stories of their days as performers.  Mermaid Vicky (now in her 70s and looking amazing) even performed with Elvis at one point.

Weeki Wachee offers the adult camp several weekends per year.  Our teachers were the "Legends" -- former professional mermaids who volunteer to teach the camp.  They were fabulous and definitely made me want to keep swimming (they were all in GREAT shape).

We assembled for the camp on a cool Saturday morning in October.  There were 8 campers from across the country -- a nurse from Oregon, a NASA engineer, two fabulous sisters from Georgia on a girls weekend with a friend (they even had official mermaid names), an aquarium diver, a veterinary tech, and me (lawyer by day, mermaid at heart).  A great group of women.  We put on our tails when we first arrived, and posed for some photos.  Putting on the tail is difficult.  There are fins wedged into the bottom, and the tails are basically like giant Spanx.  You kind of pull them up from the ankles like panty hose.  Once you're in, you can either shuffle like Morticia Adams or hop around.

Here I am, in all my mermaid glory (breaking the Internet): 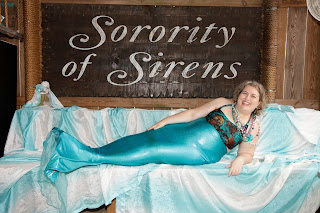 Here are a couple of group photos of the campers and our teachers. 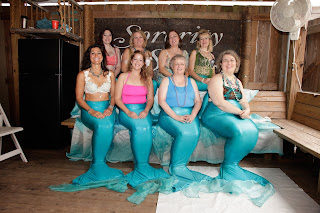 The spring is pretty chilly (74 degrees) and there are professional mermaid shows every hour during the day, so we would go in for approximately 30-45 minutes at a time.  We did a preliminary swim without the tails, to get our bearing.  The "stage" and theater are about 15 feet down.  There are speakers underwater, so when the performers were practicing beneath us, we'd dive down and catch random stage instructions -- at one point I dipped under water and heard someone shouting "kiss the prince."  Too funny.

Here I am, learning some mermaid moves.


Doing the "mermaid crawl" is kind of hard -- requires core strength.  It's basically like trying to swim with your legs tied together.  It was a great workout.  My one big mistake was not bringing nose clips ... I kept getting water up my nose which made it a little challenging to dive and pose under water.

Once we got the hang of swimming in the spring, we put on our tails.  Here is one of the only photos of me actually wearing the tail in the water.  My teacher, Mermaid Rita, basically dragged me out to the middle of the spring by my fins.  Our great mermaid camp photographer, Andrew Brusso, perched on the roof of the theater to take the overhead shots. 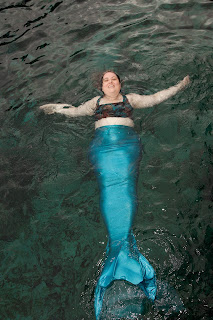 So, my attempt to swim in the tail was fairly disastrous.  After these photos, I managed to flip over, get tangled up in my fins, twist my knee (in a bad way), and inhale a ton of water.  I grabbed onto a floatation device, gave it one more try and then ditched the tail for the rest of the weekend.  Most of the other campers were more successful.  I still had a lot of fun.

In addition to swimming in a tail, I mastered the art of posing for underwater photos without looking like a chipmunk, by the end of the weekend. 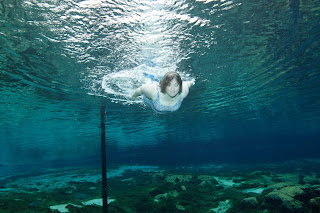 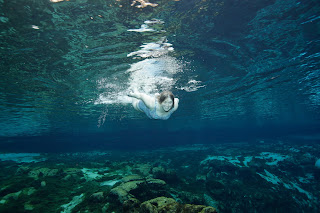 We learned some formations (or attempted to):

We watched a couple of professional shows (here are some of the current performers):

Here are three of our teachers showing us their moves:


And here is Mermaid Susie drinking a Coke under water.


I am really glad I went to the camp.  I got to hang out with a lovely and interesting group of women, I learned a lot about the park from our fabulous teachers, I got to see the secrets of how the mermaid shows are produced, and I got some great exercise.  So I met one of my goals for the year.  I also decided I don't really want to do an open water swim at this point (I got a little panicky, even swimming around in the spring) but I am going to sign up for synchronized swimming class after the new year.  I forgot how much I enjoy swimming, and the underwater ballet moves are a great workout.

Weeki Wachee offers adult camps approximately nine weekends per year.  You can get additional information here.  You need to watch their site and Facebook page in early January.  The camp sells out really fast (I was too late to sign up last year).