Spinning my Wheels: The Mermaid Bikes Underwater at Aqua Studio

About five seconds into my Aqua Cycling class at Aqua Studio, I developed a sudden awareness of my quadricep muscles.  Five minutes in, I discovered that it's possible to sweat in a pool.

After months of procrastinating, I decided to try Aqua Cycling.  I enjoy cycling (despite the fact that my own bike has been hanging unused in my hall closet for 8 years) and I love the water.  Spinning always intimidated me.  My old boss, who biked to lower Manhattan from his home in northern New Jersey on a regular basis, used to take spinning classes during lunch time.  He was in incredible shape.  I thought about trying it but it seemed a bit intimidating -- the din of the bicycles, the high volume of spandex, the screaming instructors with their headsets.  But in my quest to find new water workouts I was undeterred.  I wanted to bring my friend Bonbon, the neurologist/stroke specialist, with me -- in case I passed out in the pool.  I had a window of opportunity this week.  Bonbon was on call, but I went anyway.

Aqua Studio opened several months ago to a wave of publicity.  It is the brainchild of Esther Gauthier, a French woman.  Apparently, aqua spinning is popular in France.

From the moment I walked into the gorgeous studio on Franklin Street, I sort of wanted to live there.  The ground floor is beautiful and minimalist, with dark wooden floors and a glass enclosed stairway leading down to the locker room and the pool.  I had booked the class online.  The receptionist greeted me warmly.  Aqua Studio requires that you rent clear jelly pool shoes for the class (for a $2 rental fee).  I am blessed with freakishly large feet, so I was worried that they wouldn't have shoes to fit me -- I was pleasantly surprised that they had an ample supply in all sizes (including mine).  Shoes and towel in hand, I descended the glass enclosed stairway.  The locker room is tasteful and spotless.  I stashed my belongings in a locker (they provide keys for the lockers) and made my way to the pool, 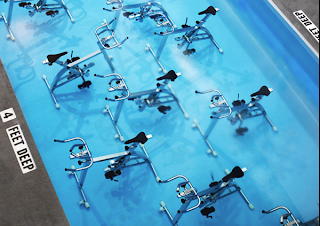 where I was greeted by name by the instructor, Ava.

There were only a few students, and I was the only newbie.  The pool area is simply designed, with a concrete deck.  We hopped in the pool, which was comfortably warm.  Ava asked whether I had any injuries and showed me how to adjust the height and position of the seat, and gave me a brief orientation (advising on how to avoid putting undue pressure on my knee).  Strangely enough, I felt a little seasick standing in the pool adjusting the bike (it was a weird sensation to focus on a fixed metal object in the midst of undulating water).  I was fine once I was on the bike.  The sturdy bikes, which are Italian, are made of stainless steel.

Ava dimmed the lights (there were candles by the pool) and cranked up the music.  We started by cycling and moving our arms around in the water.  Then we did variations of several moves.  We would stand up on the bike and pedal in one of two positions -- high jump and low jump -- Ava was in the pool with us so it was a bit hard to see what we were actually supposed to be doing.   There was a bike up on the deck.  It would have been helpful to have her demonstrate some of the moves on land.  That said, I appreciated that she was in the pool sweating along with us.  I found it a little hard to stand and pedal in the water -- the movement was a little choppy at first, and I was worried about my knee.  I kept up for awhile but I ended up spending a lot of the class sitting on the seat and pedaling furiously.  We did some occasional sprints.  For the most part, it was like spinning on land, with one exception.

At several points during the class, Ava instructed us to stand up.  Keeping our feet in the stirrups of the bike pedals, we had to lift and vault ourselves over and behind the bike seat, where we would float.  Once in that position, we were to continue pedaling while moving our arms as if we were doing the breast stroke.  To do this properly, you need to fully engage your abs.  I managed to maneuver back and forth over the seat successfully, but I was terrified of banging my head on the side of the small concrete pool, so I held onto the seat (for dear life) with one arm and moved the other (alternating arms).  Toward the end of the class, I was brave enough to let go and try it with both arms.  I stroked along smoothly until one of my feet flew out of its stirrup -- at that point I reverted to the one arm method.

We pedaled consistently for about 40 minutes and ended the class with a cooldown and stretch to Adele's Skyfall.

The Aqua Cycling workout has been compared by some to getting a massage -- the Aqua Studio website claims that you will sleep better after the workout.  I would not say it is like a massage (the workout basically kicked my -- er -- mermaid tail).  I will say that I felt really great when I got out of the pool.  I slept like a rock that night.

Would I try it again?  Maybe.

If you already like spinning, you will probably love it.  The classes are a bit expensive (a trial class was $34 and an individual class is $40 after that).  It's about the cost of a class at Soul Cycle.  I was probably the oldest person there by a couple of years (and the next class was full of a gaggle of spandex-clad 20 somethings).  For me, I think it will be an occasional splurge.  I definitely worked some muscles that I hadn't used in awhile and I noticed that I was faster in my next deep water running class.  I didn't love it enough to make it part of my regular routine, but I am going to get my bike tuned up and take it for a spin in the park -- the cycling really seemed to help my knee.  And next time I go to Aqua Cycling I'll bring some friends.

A few other points:

- Most of the classes at Aqua Studio are for women only (this is because they only have one locker room).  They have added two Saturday afternoon classes for men.  You can check the schedule on the website.

- Aqua Studio is located at 78 Franklin Street, between Church and Broadway, across the street from (in dangerously close proximity to) Billy's Bakery, which has some of the best cupcakes in Manhattan.  After my grueling workout, through a surprising act of sheer will power, I resisted the temptation to pop into Billy's for a banana cupcake.  Instead, I treated myself to a cab ride home.