As I mentioned in my previous post, Vancouver is home to the longest pool in Canada.  I spent most of my vacation on dry land, frolicking with my friend the White Rabbit, her husband the Red Rabbit, and the wee Pink Rabbit.  Since we had all been there before, we didn't feel obliged to hit all the major tourist spots, but we covered a lot of ground (mostly on foot).  We saw enough that I'm breaking it up into a few posts.  For me, it had all the elements of a perfect vacation -- good friends, good food, and handbags (which will be covered in Part 2).

Vancouver is home to a number of great restaurants, but the burgeoning gourmet food truck scene in downtown Vancouver is a major source of local pride.  Prior to 2010, city regulations only permitted food carts in Vancouver to sell hot dogs, roasted chestnuts and sodas.  Seizing on the food cart trend, a savvy politician pushed through changes in local law that year (allowing licensing of a wider variety of mobile food options) and there are now more than 100 food trucks in downtown Vancouver.  Licenses are doled out through a competitive process (in which food bloggers play a role).  As foodies, the Rabbits and I decided to try Vancouver Foodie Tours "World's Best Street Eats Tour" (CAN $49 for a 2-hour tour, including food tastings -- tour schedules and other information are available on their website).  We met our well-informed tour guide, Andrew, in front of the Japadog cart on Smith and Burrard.

Japadog was created by a Japanese ex-advertising executive who came to Vancouver with dreams of starting a food business.  They offer a variety of hot dogs (including seafood and vegetarian options) from several carts and one storefront in Vancouver.  They also have a shop on St. Mark's Place in New York City, which is sort of a dangerous discovery for me.  I didn't know that hot dogs are the White Rabbit's guilty food pleasure.  We split a Kurobata Mayo dog topped with teriyaki, Japanese mayo (insanely tasty -- and I don't normally like mayo), onions and shredded nori (seaweed).  Looks a little scary but it was delicious (good blend of Asian flavors and textures and delicious high-quality sausage).

Food vendors have to go through a rigorous selection process to secure locations in Vancouver, and they are subject to random inspections -- so the trucks were all very clean.

After walking through Robson Square, 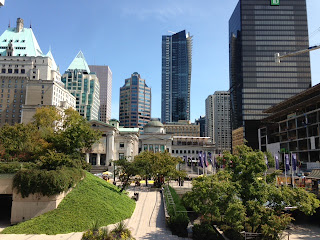 we stopped at Mom's Grilled Cheese (where we didn't actually get to try grilled cheese -- we had some homemade mint and ginger lemonade, which was lightly carbonated and not too sweet -- I found it really refreshing).  The proprietress, Cindy Hamilton, used to run craft services trucks for film shoots (including for the film Kill Bill, in China, for which she was a stand-in for Uma Thurman).  The sandwiches looked and smelled amazing, with nicely toasted bread oozing with cheese. 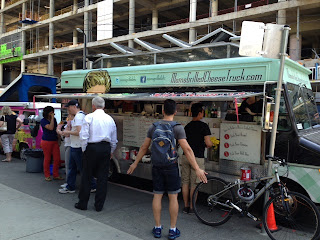 The Pig on the Street cart, next to the grilled cheese truck, looked tasty (but we did not try it).  We trundled over to the nearby Eat Chicken Wraps truck and had one of my favorite tastings of the tour -- a hoisin chicken roll (five spiced organic chicken, hoisin and veggies wrapped in a crispy Chinese pancake). 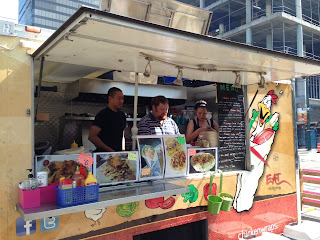 The combination of flavors was spot on, and I liked the contrast of the crispy pancake and the fresh spring onions.  The chicken wraps are prepared by a husband and wife team (Danny Mei and Sammy Ma) using fresh organic ingredients.  Yum.

Next, we hit the Soho Road Naan Kebab truck, next to the Vancouver City Sky Train station, where we sampled some delicious butter chicken and freshly baked naan (they actually bake naan in the truck, and the kindly chef gave the Pink Rabbit some extra naan to nosh on). 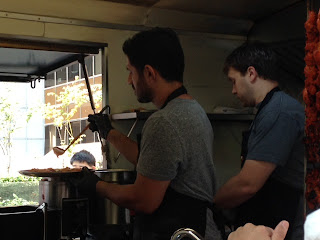 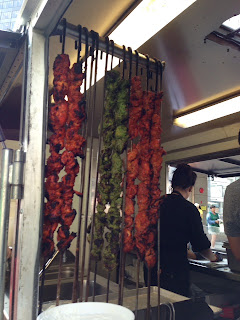 The chicken was moist and tender, and the naan was fresh and delicious.  Soho Road gets bonus points for friendliness (and the food was great). 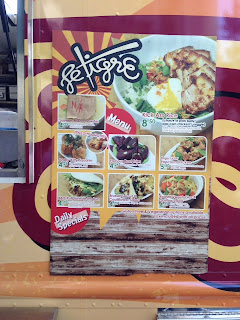 Finally, we made our way down to Le Tigre, where we tried some really delicious Asian inspired roasted brussels sprouts and cauliflower (delicious) and I had beet fries (so-so -- I was allergic to the other option, which was shellfish based).  The chef at Le Tigre can be identified by his signature Hello Kitty glasses. 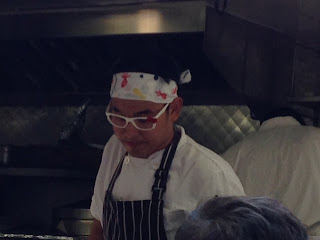 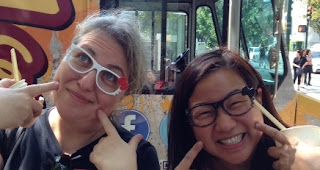 We finished up with Chocolate Diablo cookies from the Tacofino truck (chocolate with a hint of chili -- really good -- crispy on the outside and chewy on the inside).

The tour was worthwhile.  Andrew is a trained chef, and gave us a lot of history about Vancouver's food trucks.  He is an accountant by day, so he also provided a lot of information on the economics of the food truck business (I suspect a lot of people fantasize about opening food trucks -- it is definitely a tough business).  Vancouver Foodie Tours also gets bonus points from me for making accommodations for food allergies and dietary restrictions (a couple of us had shellfish allergies and there were two vegetarians in the mix -- the tour organizer could not have been more gracious).  We also met some nice fellow foodies on the tour.